Russia is not your conventional holiday destination, but to travel by train across this vast and mysterious country really is the experience of a lifetime. A Russia Experience holiday on the Trans-Siberian Express takes you right to the heart of this great country, beyond the facts about Russia you think you know, to see for yourself the diversity, culture, and history of this fascinating place. And just think of the holiday photographs!

The world’s largest country, Russia is home to 145 million people – although not all are ethnic Russians. The Eastern regions of the country were originally separate Asiatic territories (before the era of the “nation-state”), inhabited by Asian peoples of great diversity – the Evenki, the Eveni, the Tuvans, the Buryats, the Chukchi, the Koryaks, and many others.

Russia’s turbulent history has left its mark on the country, as has a fervent adherence to the Orthodox Church, whose onion-domed cathedrals and churches are almost synonymous with Russia’s image abroad. In the period 1917-1991 Russia reinvented itself – and its Imperial-era territorial possessions – as the USSR, and the period of Soviet rule still remains a major influence on the way the country appears today.

However, Russia has rapidly cast-off the Soviet straitjacket – aided by the discovery of oil reserves in the Siberian North which may equal or exceed those in the Arabian Gulf. Russia is now the world’s leading oil producer (if we count by barrel, rather than by revenue), and overtook Saudi Arabia in 2004. The sophistication, infrastructure and disposable incomes in Russia’s large cities confound outdated cliches about bread-queues and selling your jeans.

Russia’s rich cultural legacy embraces all forms of the Arts – visitors interested in music, literature, fine arts, opera, ballet, film, jazz, and rock won’t go home disappointed. But nor will those whose tastes run more to cosy bars, excellent restaurants, and wild nightclubs – Russia really has it all.

A railway journey on the famous Trans-Siberian Express is a way to really get to know Russia – its people, architecture, history and culture. This is no ordinary holiday; it is an experience you will treasure for the rest of your life. 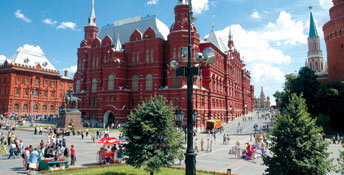