On a holiday packed with new experiences a trip to Lake Baikal is an adventure not to be missed. You may be relieved to know that the train no longer has to cross the pack ice in Winter – the railway lines now run round the lake which is a somewhat safer option!

Baikal is the world’s largest stretch of fresh water, and the largest lake on the planet. Formed by plate tectonic movements of the earth’s molten crust, it’s a unique environment where species long extinct elsewhere have their strange existence. Baikal has the only freshwater seals in the world – nerpa nerpa – stranded here thousands of miles from the sea. Still odder is the strange golomka, which lives at such depths – Baikal is the world’s deepest lake, over a mile to the bottom – that it explodes due to pressure-change if netted and dragged to the surface. Some of the animals, fish, algae and plants found in Lake Baikal are unique – and as you gaze over this vast expanse of water you sense it may contain much more than has so far been discovered.

Surrounding this immense lake is a huge National Park, preserving yet more local wildlife. Lakeside villages like Bolshie Koty (“Big Cats”) aren’t called that for nothing – there are still lynxes in the area, although living deep in the taiga away from human contact (so don’t expect to see one!).

Lake Baikal was the biggest problem that faced the Trans-Siberian Railway builders – its huge size (40 miles across) lay directly in the path of the railroad. Their first solution was a steamer accommodating the entire train, and ferrying it safely to the other side – but winter temperatures forced them to lay tracks directly over the pack-ice when the Lake wasn’t navigable. Having lost several locos through holes in the ice (there are a few warm springs down there..) the Circum-Baikal Line was built.

Baikal is accessed from the more developed Western shores (from Irkutsk) or the less-visited Selenga Delta on the East shores (from Ulan-Uday).

Arriving at Lake Baikal by train is an awe-inspiring sight and another holiday memory you will treasure long after you have returned home. 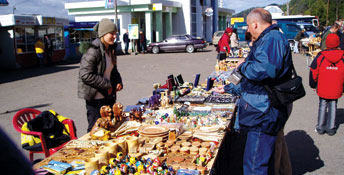