As a holiday destination, Beijing is so full of things to see and do you could easily spend several weeks here. Including Beijing as a stop on a Trans-Siberian adventure is an ideal way to take some time to explore the sights and sounds of this incredible city and its outlying attractions. Originally a Mongol-built city (where Marco Polo served the Great Khan), Beijing eventually sent armies to Mongolia to deal the death-blow to the parent culture, and established itself first as the dominant city – then capital – of China’s North. The cultural and architectural heritage could keep you busy in Beijing for weeks. Most visitors at least manage to get around the Forbidden City (the former city-within-a-city of the Emperors, where entry was “forbidden” to commoners) – a vast area in itself. The Temple Of Heaven dates from a similar period – where the Emperors would pray to the gods for good fortune for their people. The Summer Palace marks the high point of Imperial largesse – stupendous landscaped gardens stacked with follies, tiny palace buildings, a lake with ornamental dragonboats, and everything an Emperor might desire. If you can find a little more time, a host of attractions are jostling for your attention – temples, night-markets, the old area of the Hutongs (the former backstreets of the Imperial City), Behai Park… the list goes on and on. The close proximity (four hours by road through the gridlock) of the Great Wall Of China tempts most visitors outside the sweltering summer heat of the city quickly, and this kind of trip can also be combined with other attractions such as the Ming Tombs, which are loosely-speaking “on the way”. Beijing’s throbbing nightlife covers most options – from elegant dining in Chinese traditional style through to modish restaurants of all kinds of other world cuisines… and dancing of every kind. Beijing has something for everyone – culture, architecture, history, shopping, nightlife, endless places to eat and drink. Disembark from the train here and discover an exciting and magical city, another highlight on the holiday of a lifetime. 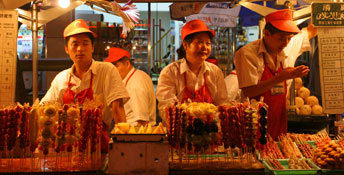